This is a fairly typical comment of the sort that can be encountered in any camera club competition on a regular basis, the viewer (Or judge) seeking to impose upon the image what they want rather than looking at what is actually being portrayed. So, let’s consider the image below and the comments that were made. 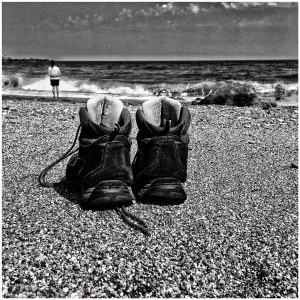 Perhaps they are looking out to sea because they want to, they have become lost in the joy of watching the sea and hearing the waves crashing onto the gravel / shingle, or perhaps they’ve noticed the photographer there and do not wish to have their face captured. Should the photographer have approached the person before taking the shot and ask them to remove their shoes and face the camera? To do so may have resulted in a refusal and would have certainly destroyed the moment.

The focus is obviously upon the boots with the background being deliberately kept out of focus, this is what emphasises the boots themselves. Who do the boots belong to? The photographer or the person standing by the sea – if so that would imply a relationship between the photographer and the person – such a relationship may not exist but could be a result of the alignment of person and boots themselves resulting purely from the flatness of the image itself.

In reality, I was a photographer, the image was made using a mobile phone with the focal point set being set on the rear of the boots. The boots are there because I just taken them off before putting before putting my beach shoes on and joining my wife (who hates being photographed) at the edge of the sea, the image (hopefully) captures the desire of the photographer to get his feet wet after a walk, when he saw something that interested him thinking “I wonder what that looks like as a photograph”. The resulting image is what I wanted it to be and, captured a small moment of time in which several things came together – it was to quote, Henri Cartier-Bresson the decisive moment.

Should I have waited for my wife to walk out of the frame or changed the position of the camera so that she wouldn’t appear in the image? Perhaps I could have removed my wife from the image using Photoshop instead?

In neither case would the resulting image be a true representation of what I saw and what I wanted to capture. What is important is what is in front of the lens and not what someone else wants to be there. It is, what it is, and should be accepted and viewed as such.